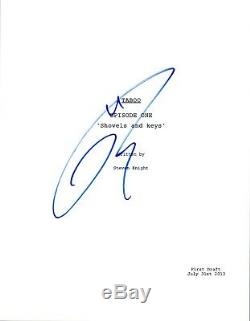 Tom Hardy Signed Autographed Script. Item : "TABOO" Full Pilot Script. At an appearance in New York City in 2017. The 8.5x11 glossy cover page is hand signed by the celebrity. Script is printed on standard 8.5x11 paper and comes fully bound together. A COA from Entertainment Autographs will be provided. Cp Entertainment Autographs has a team of individuals who regularly obtained autographs directly from the celebrities themselves.