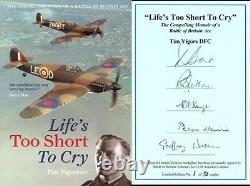 Life's Too Short To Cry. The compelling memoir of a Battle of Britain Ace. It is not often that a remarkable gem of a manuscript is uncovered and published. The persoanl memoirs of Tim Vigors DFC is just one example. Born in Hatfield but raised in Eire and educated at Eton and Cranwell. Early 1940 found Tim in France flying Fairey Battle bombers and soon after he converted to fighters, joining 222 Squadron with whom he had distinguished service over Dunkirk and then during The Battle of Britain, when he became an ace.

He was transferred to the Far East in January 1941 as a flight commander with 243 Squadron and then to 453 Squadron RAAF. On 10th December he led a flight of Buffaloes to cover the sinking Prince of Wales and Repulse.

Dramatically shot down and burned he was evacuated to Java then from there to India. Throughout, the author describes his experiences in an honest, refreshing way.

It is a fascinating and valuable record, one destined to be seen as a classic. The book is supplied with a titled, Special Limited Edition, bookplate out of 50, which has been personally signed by. Squadron Leader Geoffrey Wellum, DFC. Wing Commander Bob Doe, DSO, DFC. Flight Lieutenant Peter Hairs, MBE.

The book has never been read and is in very good condition showing expected, normal shelf wear. There are no tears or rips to the cover or pages. The bookplate also comes with a Certificate of Authenticity.

IMPORTANT NOTE: The issue 1/50 bookplate illustrated in the listing photo is not the actual edition number for sale. It's a stock image used and the edition numbers supplied will vary. The item "Tim Vigors autobiography book signed by 5 RAF Battle of Britain Fighter pilots" is in sale since Tuesday, October 20, 2020. This item is in the category "Collectables\Militaria\World War II (1939-1945)\Books". The seller is "chinthey" and is located in Cambridgeshire.