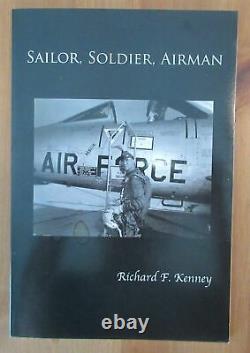 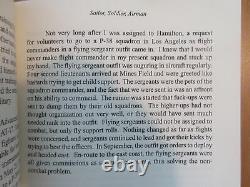 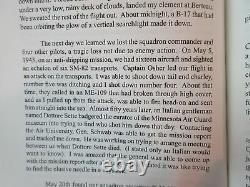 Lots of interesting anecdotes but note only 48 pages! Flew P-38s over North Africa and Survived Stalag Luft III as a POW. Cabbage stew, Red Cross parcels, severe punishment and drafty bunkhouses became an accepted way of life for Dick Kenney during World War II, but not before the young pilot took his toll on the enemy. Kenney was born March 2, 1920, in Santa Cruz, Ca. As one of five children to Lt. Patrick John and Doris Kenney. His father died when he was young and Kenney was raised by his mother in Coronado, California where he gained a reputation for being a big kid who liked to work and play with equal passion. He excelled as a junior sailor throughout the late 1930s, winning numerous regattas at the Coronado Yacht Club in Star boats, Great Lakes scows, and Sunbirds of the Rainbow Fleet. He graduated from Coronado High School, class of 1938, and was the last surviving member of that class. Kenney obtained his pilots license in 1940 at the Clyde Corley Flying School at Lindbergh Field.

In September 1941 he went into the Aviation Cadets at Cal Aero in Chino, California. He completed flying school in 1942 and was commissioned second lieutenant before being assigned to a P-38 squadron stationed at Hamilton Field just north of San Francisco. Soon after that Dick Kenney deployed with the 82nd Fighter Group out of Los Angeles and then flew with the 95th Fighter Squadron in Ireland and North Africa. During evasive maneuvers to avoid Nazi U-Boat attacks, the former cruise liner hit one of its military escort cruisers, slicing it in half and killing more than 300 men. We watched helplessly as wreckage floated past our portholes, he would recall years later.

The reality of war had hit home rapidly for the young pilot eager to fight for his country. Kenneys airplane was the P-38 Lightning, one of the most significant aircraft of World War II and a veritable killing machine. The merchant vessel was left at a complete standstill belching black smoke and steam after the explosion.

It was one of our bombers flying overhead, warning of a group of Messerschmitts dropping in on the P-38 pilots in search of an easy kill. Kenney righted his aircraft only to find himself in a head-on run with one of the Messerschmitts, guns blazing. Kenney won that duel as the Messerschmitt flamed and then crashed into the sea. On another mission Kenney attacked a flight of six Italian transport aircraft (SM-82). He took out the rear transport, and then the next.

As he took a bead on the third transport, a Messerschmitt assigned to cover the transports dropped out of the ceiling and opened fire on Kenneys P-38. Kenney wheeled his plane around and shot down his attacker.

That, including the two SM-82s, gave him a total of four confirmed kills. Later, while escorting a flight of B-25 bombers over Sardinia, Kenney and his wingman were under attack by several Messerschmitts. Kenneys wingman took down one of the German planes but the air was a mixed up portrait of planes and lead. Kenneys guns jammed and his wingman had to switch gas tanks so they decided to hit the deck for home at about 400 miles an hour. The Messerschmitts had the weather gauge, however, and werent ready to give up the fight.

They were dropping down on us fast, and their bullets were exloding at maximum range just outside my canopy. We couldnt outrun them so I signaled my wingman to turn back into them, recalled Kenney. He shot at one and missed, shot at another and it went down. The second plane ran for it and I had the third one in my sights but my guns were jammed.

Kenneys jammed guns preventing him from scoring a fifth kill that would have given him ace status, however, and despite having no firepower of his own, Kenney saved his wingman by boldly bluffing the third enemy plane out of the air. That action resulted in a United Press International story that hit newspapers back home.

The headline read, Coronado Flier Bluffs Enemy. Richard Kenney complained about that fifth elusive kill until his dying day but the U. Army awarded him a Distinguished Flying Cross for his bravery in action during that skirmish with the enemy. Two months later Kenney was sent on another mission to fly in low and strafe a radar tower in Sicily in preparation for a B-25 bombing run.

As acting operations officer he intentionally put himself in the final slot, knowing that his pilots were young and inexperienced, and whoever flew that tail position would take a lot of heat from the ground guns. There was never any other option, he recalled years later. I knew the ground fire would be dialed in by the time our final plane made its pass. There was no way I was going to put someone else in that position.

That decision took Dick Kenney out of the war for the duration. His left engine was hit by surface-to-air ack-ack fire, engulfing the plane and pilot in fire. Unable to reach the water, Kenney crashed on a Sicilian farm. He was captured and taken to Palermo where he received some treatment for his wounds.

Kenney was interrogated, had a gun put to his temple, and was thrown into solitary confinement before being incarcerated in a POW camp as guest of Adolf Hitler. One of the camps he was to call home was Stalag Luft III, 90 miles southeast of Berlin in what is now Poland. Stalag Luft III was inspiration for the movie The Great Escape, throwing a light on Kenneys misfortune that gave it (and him) celebrity status in the years to come. While he was not one of the prisoners trying to escape, he worked night and day to help make that escape happen.

Dick Kenney served as an officer in the Army Air Corps (later the Air Force) for 27 years, logging 6,000 flight hours that covered two wars. Flying was my life, he often said proudly.

He became carrier qualified (unusual for an Air Force flier), and spent a year as a Navy flight instructor where he played a role in helping the Navy make the transition from propeller to jet aircraft. He then went on to serve as emissary of the United States assigned to assist the Mexican Air Force in their transition into jets. He was presented with Mexican Wings and made an honorary member of their air force.

Colonel Kenney trained combat crews in aerial gunnery bombing and strafing out of Nellis Air Force Base in mid-1953. In search of that elusive fifth kill to qualify him as an ace, Kenney signed up to fly in the Korean War, as squadron commander of a Saber jet outfit. The war, however, was all but ended, and so had his chances to achieve the title of flying ace.

After the Korean War Kenney was assigned to the Pentagon and flew F-86s with the DC National Guard at Andrews Field, Md. Upon completion of this tour he was assigned to fly F-100s out of Foster Air Force Base in Victoria County, Texas until the base was closed in 1958. Later on he was stationed at Misawa, in a remote portion of Japan. His squadron stood nuclear alert in Northern Japan where he helped them transfer from obsolete straight winged F-84s to the Super Sabre F-100s. He was then assigned as advisor to the Sioux City National Guard where he was promoted to full Colonel. His final military assignment was at Myrtle Beach, SC.

As deputy commander of operations for the 354th TAC Fighter Wing flying the familiar F-100 with a NATO commitment. Colonel Richard Kenney enjoyed his final years at home, in Coronado, riding his bicycle and working on his 36-foot Grand Banks trawler that he would use to escape from the July Fourth crowds on Coronado. During this time another small chapter from his youth surfaced and received attention in the print and television media. Kenney and his brother were on Coronado Beach New Years Day, 1937, when the floating gambling casino Monte Carlo wrecked in the shallows. In Kenneys case it was pocketfuls of silver dollars.

At his request, there will be no funeral services, however, friends have submitted his name for consideration on the Avenue of Heroes. Colonel Richard Kenney will be buried in the family plot at Fort Rosecrans.

Donations in his memory are encouraged to the Coronado Yacht Club Junior Sailing Program in his memory. Thats where I started, and thats where Id like it all to finish, he said. Colonel Dick Kenney passed peacefully in his sleep the morning of Dec.

Listing and template services provided by inkFrog. The item "Signed LOCKHEED P-38 PILOT BOOK 82ND FIGHTER GROUP 95th squadron richard kenney" is in sale since Monday, March 22, 2021. This item is in the category "Collectibles\Militaria\WW II (1939-45)\Original Period Items\United States\Books". The seller is "aviationbug" and is located in Saint Augustine, Florida. This item can be shipped worldwide.