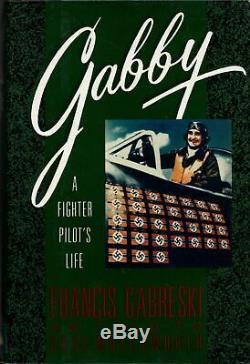 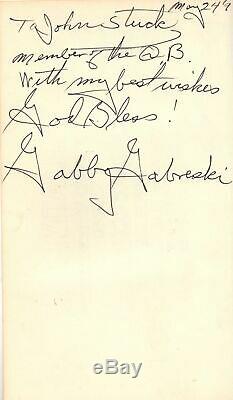 Gabby: A Fighter Pilot's Life: Frances Gabreski as told to. Notes: Inscribed by Francis Gabreski to John Stuck. Price clipped jacket has minor wear, binding sound, front endpage has an embossing, internally clean. If ever a man has earned his place in the annals of military history, that man is Francis "Gabby" Gabreski.

His exploits as a fighter pilot in World War II and Korea are legendary; his rise from humble beginnings to success in military and business careers is inspiring. This is the full story of Gabby Gabreski, told in his own words. Gabreski's life is a classic American success story. Born to Polish immigrant parents in 1919, he nearly washed out of Notre Dame and then flight school. He was down to his last chance, and he made the most of it. A witness to the Japanese attack on Pearl Harbor, Gabby had his own first taste of air combat flying with a Polish RAF squadron.

Shortly thereafter he joined the 56th Fighter Group of the U. 8th Air Force, and in seventeen months he shot down twenty-eight German planes, the highest total of any 8th Air Force pilot in Europe. He became a hero whose name was splashed across newspaper headlines from coast to coast. And then, on the very day he was to fly home to his fiancee and a hero's welcome, he took one last combat mission, crashed and, after a daring attempt to avoid capture, finished the war in a POW camp. He scored 6.5 more victories there, making him one of the few pilots ever to achieve ace status in two wars and in both propeller and jet aircraft.

He retired from the Air Force as a colonel in 1967 and spent the next twenty years working in the aviation industry, sustained, as always, by his devout religious faith and his deep love for his family. Now, drawing on his private documents and photographs, Gabby, along with writer Carl Molesworth, tells his thrilling eyewitness story with a candor and a vivid style that should earn this brave pilot a whole new generation of admirers. The item "Gabby A Fighter Pilot's Life Frances Gabreski WWII Signed ACE" is in sale since Saturday, June 15, 2019. This item is in the category "Books\Nonfiction".

The seller is "jbirkitt" and is located in Sarasota, Florida. This item can be shipped worldwide.