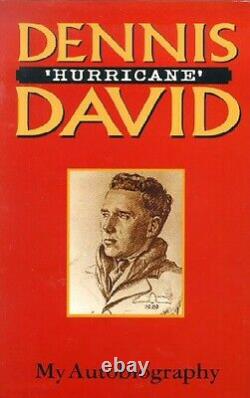 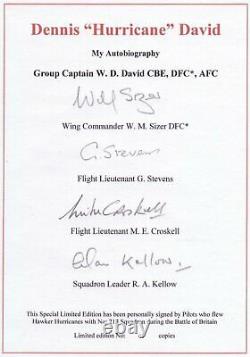 The story of Group Captain W. Dennis David is a name well known to aviation historians. Born in Surrey in 1918, Dennis David had a very distinguished war record, both during the Battle for France and the Battle of Britain. This is his autobiography of his flying career until he retired in 1967. The book is supplied with a titled, Special Limited Edition, bookplate numbered out of 100. Which has been personally signed by the following distinguished Battle of Britain veteran fighter pilots, all whom flew with 213 Squadron during 1940. Wing Commander Wilf Sizer DFC. Flight Lieutenant Raymond Alan Kellow.

The book has never been read and is in very good condition. The bookplate also comes with a Certificate of Authenticity. IMPORTANT NOTE: The bookplate illustrated in the listing photo is a stock photo and not the actual edition number for sale, as these will vary. The item "Dennis Hurricane David 1st edition book signed by 4 RAF Battle of Britain pilots" is in sale since Tuesday, August 11, 2020.

This item is in the category "Collectables\Militaria\World War II (1939-1945)\Books". The seller is "chinthey" and is located in Cambridgeshire. This item can be shipped worldwide.